Helena Koenigsmarková has studied art history at Faculty of Arts at Charles University in Prague. Since graduation she has been working at the Museum of Decorative Arts in Prague (UPM; since 1991 as its director). She represents UPM in many local and foreign professional associations – she is a chairman of the Commission of Arts and Design ICOM / ICDAD since 2014, the president of European association Light and Glass, a member of the Czech Grand Design jury, a member of the honorary committee of Designblok, a member of the Arts Council of Academy of Arts, Architecture & Design in Prague. UPM is a partner of the IGS symposium, International Symposium of Ceramics in Bechyně, Glass Art Centre of Glassworks František in Sázava and generally supports all major events in the field, including Stanislav Libenský Award.

Maja Heuer is a founder and director of The Glass Factory, Sweden’s glass centre, consisting of a museum with one of the biggest Scandinavian glass collections, and a hot shop. The Glass Factory constantly collaborates with Swedish and international artists. She has studied art history and museology at the Stockholm University and is specialized in contemporary Swedish glass and craft. She has curated several exhibitions, both traveling exhibitions in the US and Europe. She is currently involved in several EU-collaborations as a curator for the area of Scandinavia for The European Glass Context.

Erika Tada graduated with an MFA from Rochester Institute of Technology in 2005, and a PhD from Tokyo University of the Arts in 2012. Her poetic artwork cherishes her personal experiences and the feelings associated with them through the use of objects that play key roles in commemorating her memories. Her focus is on the techniques of pâte de verre and casting.In 2001, Vetro Magazine named Tada “Best Debut Artist at SOFA Chicago”, and in 2005, she was a winner of the international student exhibition of GAS conference in Australia. She has held residencies at The Corning Museum of Glass, Pilchuck Glass School, Tacoma Museum of Glass, Hastings College, and a fellowship from UrbanGlass. She has been an instructor at numerous schools including Rochester Institute of Technology, Pilchuck Glass School, Corning Museum of Glass, Bullseye Glass Company, Pittsburgh Glass Center, and Jacksonville University. Her artwork is shown at many galleries throughout the US, and in Japan. She is currently teaching at Tokyo University of Arts, Japan.

Charlie Parriott is an American artist and consultant living and working in Seattle, Washington and Prague, the Czech Republic. Parriott has been working with glass in commercial and artistic applications since 1972. He is one of the few Americans to have studied with, and later, to have taught with, legendary Czech sculptors Prof. Stanislav Libenský and Mrs. Jaroslava Brychtová in the 1980s at the Pilchuck Glass School. In later years he returned to Pilchuck to teach with Michal Machat and Martin Velíšek, and in 2001 with Stanislava Grebeníčková and Milan Handl. After a 12-year stint as colorist for the Chihuly Studio, Parriott moved to direct construction and program development of the hot glass studio for the Museum of Glass in Tacoma, Washington. Currently, Charlie pursues his own artistic career while continuing to fabricate challenging works for other artists and companies. He has teamed up with leading glass facilities and studios to produce works for Mike Kelley, Eric Fischl, Richard Jackson, Preston Singletary, Sherrie Levine, and many others. He is a Fulbright Scholar and recipient of the National Endowment for the Arts Fellowship.

Petr Nový is a head curator at the Museum of Glass and Jewellery in Jablonec nad Nisou, Czech Republic, an editor of the professional magazine Sklář a keramik (Glass and Ceramics) and a glass curator of Kuzebauch Gallery in Prague. He has devoted almost twenty years to studying a preserving contemporary and historic glass and jewellery. He prepared many exhibitions and has published number of books and articles. Petr Nový has also collaborated as an expert with well-known glass and jewellery marks such as Preciosa, Moser, Lasvit and Riedel.

The professional supervisor is Milan Hlaveš an art historian and curator. He is the head of collections of glass, ceramics and porcelain in the Museum of Decorative Arts in Prague. He worked at the National Technical Museum and at the Museum of Glass and Jewellery in Jablonec nad Nisou. He is the author and co-author of more than forty exhibitions, numerous articles in professional journals and a member of many competition committees. 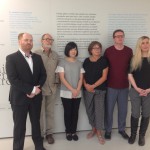 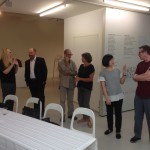